In commemoration of the 40th anniversary of the beginning of Oil Exploitation in the Campeche Probe, Petróleos Mexicanos, through the Subdirección de Producción Bloques Aguas Someras AS01 of Pemex Exploración y Producción, together with the Colegio de Ingenieros Petroleros de México, A.C., organized a week dedicated to celebrating this event.

It began with an inauguration followed with a photographic exhibition on the subject of oil, it continued with a series of conferences, oil exhibitions, and sports activities.

The event was attended by workers, associations, universities, companies, and personnel related to the Petroleum Industry in the marine zone, who met to celebrate that on June 23, 1989, oil production began in the Campeche Probe, as well as the 2019 National Engineer day.

During the event, a recognition was given to Ricardo Rubio Orozco, Deputy Director of Business Development at Blue Marine, for being one of the pioneers in the area of construction and installation of platforms and marine pipelines, who for more than 30 years has contributed with his knowledge and effort to consolidate these marine structures in the Gulf of Mexico. 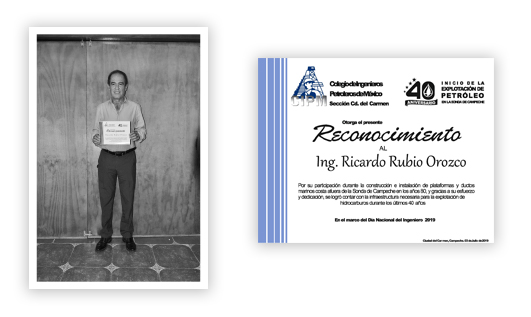 We are proud to know that within our team we have people who have laid the foundations for what the oil industry in Mexico is.